Welcome to our Day Two review.

Day one of the Berlin Crypto Conference was excellent, I think Joseph and I learned a lot, though with a degree of skepticism.

Some of the talks, especially the panels, were very informative, though we had to remain cautious about what was PR/Marketing, what was informative, and what was actually disruptive.

Day two of the conference, we enjoyed many more talks, and we’ve put together a review of some of the best ones we attended below.

Randall talked about how with GPU we overpassed Moore’s law and jumped into the next level of computation.

Jess discussed crypto-graffiti and a crypto-board game, showing that the blockchain can and will expand to be a creative part of our culture.

She questioned what we are doing with the blockchain by form of why and how we are putting data on the blockchain, and what we are and can do with this technology. The use of arts in the cryptosphere has greatly developed thanks to Jess’ efforts.

She spoke with her friend, who is very into AI and he told her that in future, AI will be able to create art. She didn’t agree with that and telling us a story why the content of the art is not important but authorship and overall background of the piece is. Then she jumped into fractional ownership as this is a way how to own a piece of art and so lower your risk exposure when owning the whole pieces of art which is extremely expensive.

Explaining fractional ownership, she said about splitting up an artwork into shares and allowing for multiple owners of a piece of art. Democratisation of the art world in the form of tokenization of art will open it up to a wider audience of people. There are high expectations for these ideas, and 75% of auction houses want to offer blockchain technology in the next five years. ⅓ intermediaries and ⅕ galleries also want to do the same but only 3% actually do this already. The opportunity is ripe for the taking.

It’s incredibly hard and complicated to find a piece of art, know the value and authenticity, bid, and then actually become an owner. The blockchain could solve this.

Jess explained that two pieces by the same artist can be valued differently because of provenance. She used the example of Jackson Pollock (see above), because one piece was found in a garage sale and the history and authenticity cannot be proven. A title registry could solve insurance, lending, authenticity issues (as well as more). They have a product called Biddable, with 50,000+ auction houses ready to use it and potentially more than a million items per year that can be listed.

It’s not easy to enter the art world, but with the blockchain, it could be.

Future of Centralized Markets: The Impact of Decentralization in the Banking Sector

Future of Centralized Markets: The Impact of Decentralization in the Banking Sector – Panel

He has advised on VCs, Financial Services, Softwares, Brands, Financial Groups, Events, Ventures, Founding members and Partners of many projects. The look for distributed value in a decentralized economy.

What are the purposes of tokens?

Security tokens are a mixture of centralized and decentralized tech, and are likely to take the biggest section of the market as they can act as shares.

Binance is the biggest centralized exchange by volume, in just six months. They have handled hack attempts well, have a functional token model, jurisdictional liquidity (Hong Kong, Japan, and Malta), ICO launchpad, their own blockchain and an upcoming Fiat Gateway.

The conference paused for lunch.

Tackling Complexity: How to create an Ecosystem, and not just a Network

Moritz – ‘Bosch makes hardware for end consumers and wants to combine the real world with the internet and digital assets also using distributed ledger technologies, but only if they bring real value to the business. Proof of concept and product driven projects.’

Sebastian – It’s important that the real and digital identities of people match, so it’s verification that we need to improve. That’s why we created IDnow. The industry is experiencing a merge of online and offline technology.

Nikita- ‘We want to create a distributed ledger technology that meets the needs of the IoT. In the way the internet became easy to use, we want to make IoT safe and easy to use.’

Host: ‘How does the IoT restructure affect certain things?’

Moritz – ‘Manufacturing companies make money by creating products for one-time revenue streams. Connecting to the internet and cloud service creates a new business model. No need to monetize hardware, just the services that are provided over the internet, and this can be part of IoT. Digital services can bring fast feedback cycles from purely digital products into physical hardware. Feature – test – measure adoption- the incremental improvement of products, this is the cycle. IoT data can be transferred to manufacturing and increase development cycles through faster feedback use’.

Nikita – ‘A truly decentralised internet. Currently, there’s not enough bandwidth for all the cool stuff we could be doing. So first we must scale massively to increase the use cases. One day they will come to life once the ability to thrive exists.’

Sebastian: ‘There will always be a level of anonymity, but the need to identify will still exist. One big advantage of crypto is you can mostly stay anonymous. On the other side, when you interact with the traditional world, you need a real identity; it’s the same for ICOs. Identification is the link between anonymity and identity.’

Moritz – ‘The identity of machines is important too in the IoT. How do you prove data comes from one machine and not another, and to add services and use the data without manipulation?

Host: ‘What are the business models we are hoping to see?’

Moritz – ‘The automotive industry is trying to build up car history data with certificates, to prove there is no manipulation etc. It’s all encrypted, and only data owner can decide who to share the data with, like a potential buyer. Third parties would be interested in data but only if it’s not manipulated and only the driver can make it available. An insurance company might pay you for your car history data in theory.

Mikko was explaining that the economy after the collapse in 2008 is only a rolling stone, which will lead to a certain global economic crisis, but nobody knows when exactly.

The global economy may rely on Bitcoin in future, which is a good store of value, anonymous, with very good liquidity and independent.

We can see the raising capitalisation of the crypto market, which is perfectly described by increasing number of ICOs and their capitalisation. 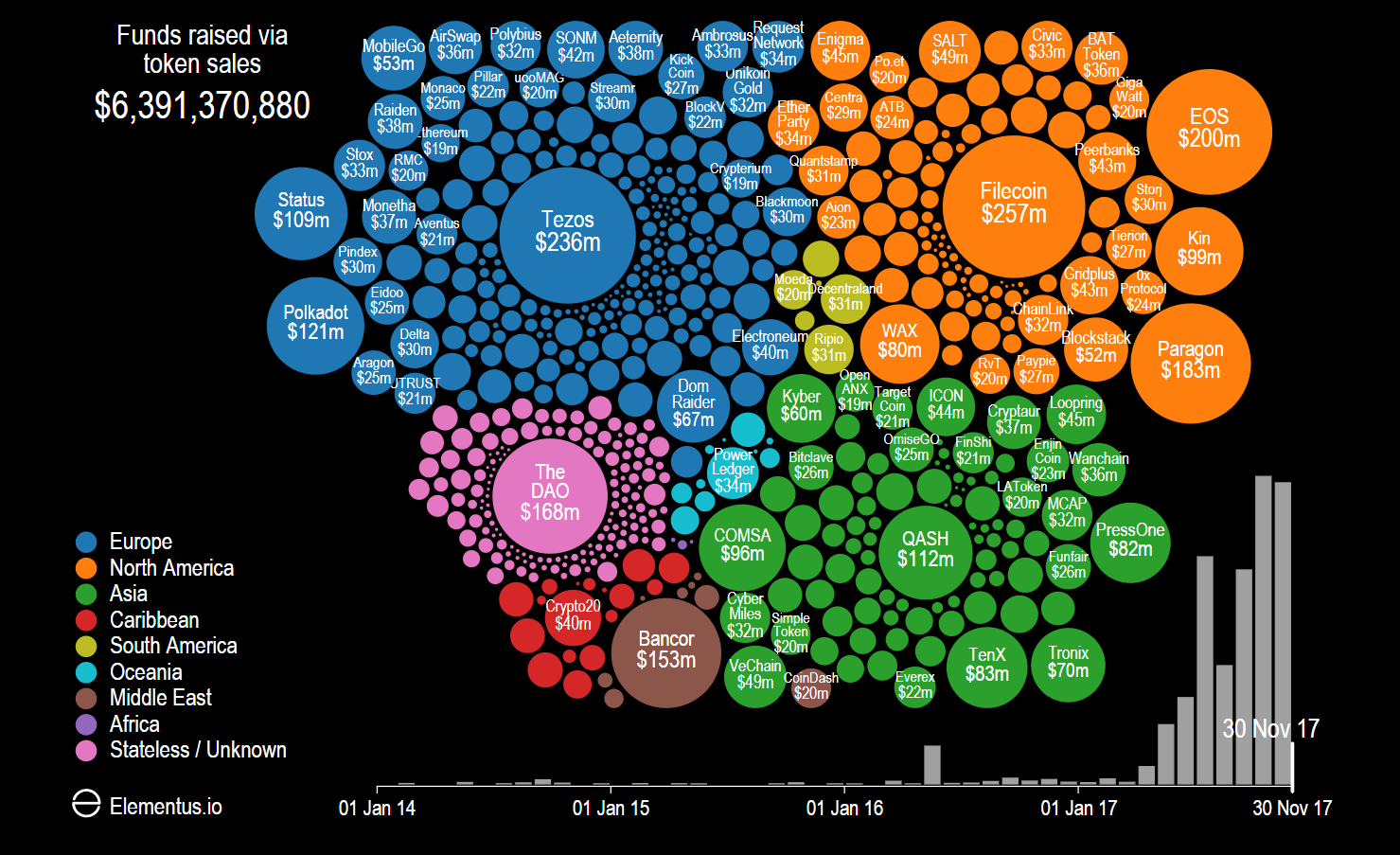 He was speaking about how the USD is losing its value because of quantitative easing, but it has its macro-economical reasons – to boost the economy and motivate investors to let money flow, but has a very bad impact on value storing.

Then he jumped to saying that Satoshi Nakamoto was a genius, and we can have an insight view of how he thinks in ‘The book of Satoshi’, which is the collection of his discussions and thoughts during his development on BTC and blockchain technology.

He showed a video of how Satoshi collaborated with other developers in the early stages of Bitcoin.

Mikko also said that he sees the future in decentralised exchanges, which will be widely spread but not major, and that a KYC process would be unavoidable because of the upcoming regulations.

Towards the end of day 2, the conference talks seemed to get progressively more interesting. Miko Matsumura, the founder of Evercoin, was particularly interesting and gave an enthralling presentation which finally brought the room to silence. For some reason, the conference hosts put the catering in the same room as the talks, and this meant there was a lot of noisy chatter throughout.

The future of communication panel was very interesting too and covered a lot about how social media could change due to the blockchain. They discussed Cambridge Analytica and overall the theme was ‘your data should be yours, to give to who you choose’. This is a good concept.

The diversity of talks on offer at this conference was great, though we felt that many of the discussions were oversimplified so that the whole audience could understand. The talks which went into technical detail were perhaps the most interesting, though the most difficult to relay. We were happy with the free food, the Station conference venue in Berlin is very cool and accomodating, and the exhibition room featured some nice projects, though it’s dubious whether some of them should be on the blockchain at all.

- Software development
Get in touch